The Picture Beyond No-Fault Evictions

Just Cause is one piece of a larger puzzle on anti-displacement, neighborhood stability, the decommodification of housing, and giving residents (landlords, tenants, homeowners, business owners) a long term stake in the well-being of their community.

As of 2018, almost half of all Chicago renters were rent burdened which means they spent more than 30% of their income on rent.​ 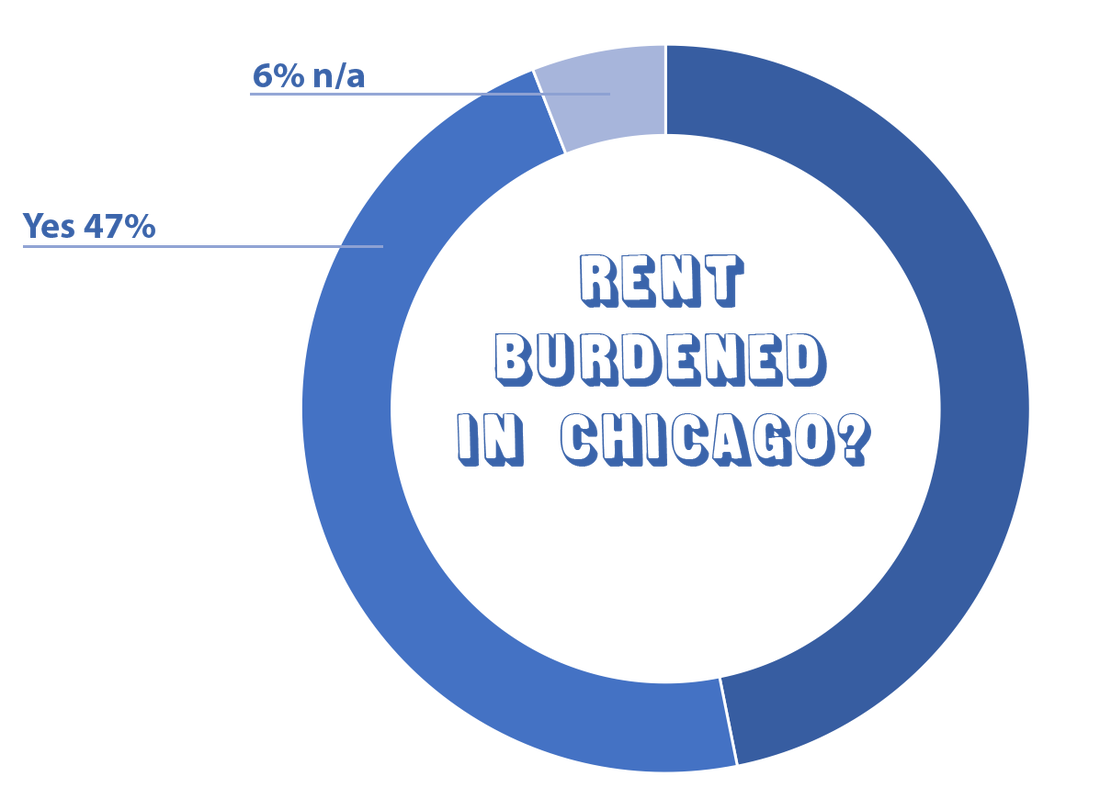 Source: 2018 ACS 1-Year Estimates Data Profiles
When a tenant is evicted due to no fault of their own, they are burdened with unexpected costs. The search for housing involves application fees, security deposits, and other associated moving fees. Tenants also face increased transportation costs as they are forced to move farther from their jobs, medical care, schools, and friends and family. According to the Federal Reserve's 2018 Survey of Household Economics and Decision Making, an estimated 40% of Americans would struggle to come up with even $400 to pay for an unexpected bill.​​
​
The lack of affordable housing in Chicago upholds a legacy of segregation that makes it difficult for vulnerable populations to gain access to new opportunities both in their neighborhood and in other parts of the city. 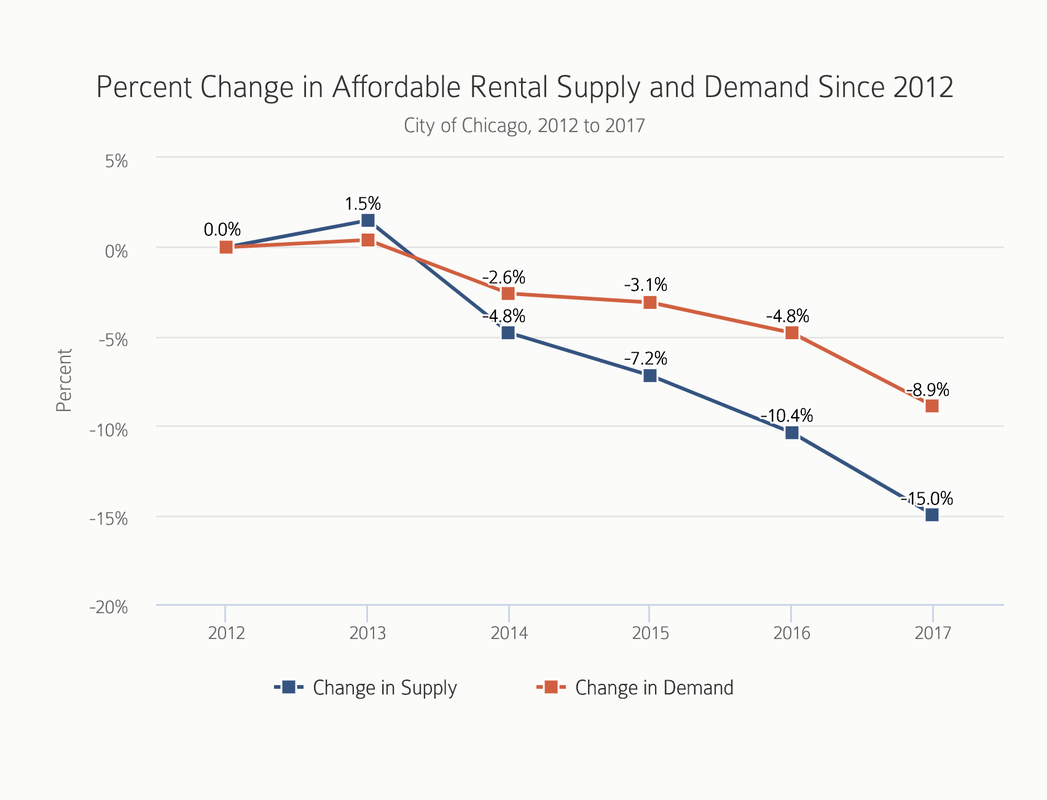 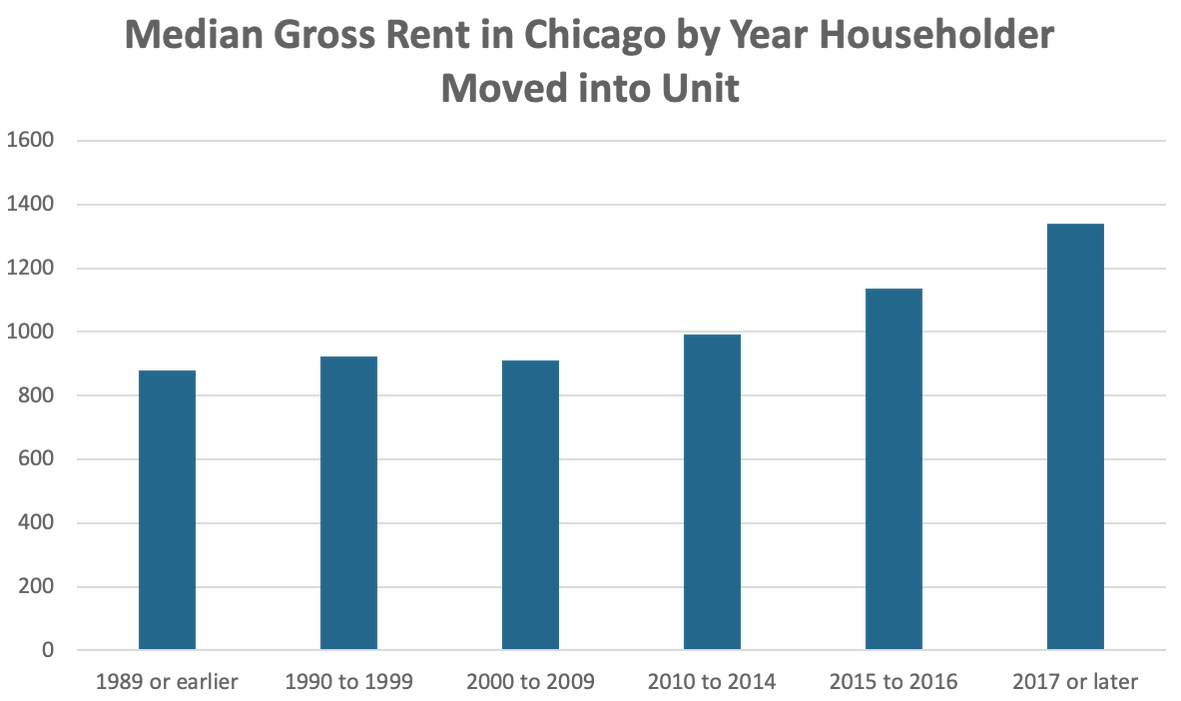 Source: 2018 ACS 1-Year Estimates Detailed Tables
No-fault evictions force long-term tenants and their families into an expensive and often unaffordable rental market. ​Families who experience eviction have higher rates of residential mobility and often experience prolonged homelessness. Children in these families perform worse in school, losing an average of three months of reading and math growth with each transfer.
​
People with disabilities are disproportionately affected. The average SSDI benefit paid monthly in Chicago is around $1,258 and the maximum amount is $3,011. ​Current price data shows the average price of a one-bedroom in Chicago is $1,560 per month. This leaves little room for other essential expenses. Affordable housing units, which are usually older structures, often are inaccessible. It is extremely difficult for tenants with disabilities to find new accessible and affordable housing when evicted.
The population of lower-cost Chicago areas is also shrinking, perpetuating the cycle of poverty and long-term community disinvestment.  According to the Institute for Housing Studies at DePaul University,
​
Renter households that earn more than 120 percent AMI continue to represent the second highest share of all renter households at 20.2 percent. Landlords are incentivized to raise rents due to increased demand from higher-income households, displacing many loyal, long-term tenants with no-fault evictions.​
​
​Neighborhoods with high eviction rates have difficulty maintaining social capital, lack local cohesion, and have little community investment. Housing instability even increases the health risk to vulnerable populations.
​Black residents account for 30% of Chicago’s population but 54% of the city’s coronavirus deaths, with the highest mortality rate of any racial or ethnic group (45 per 100,000). Evictions increase tenants' inability to socially isolate, increase the chances of being unsheltered, and exacerbate underlying health conditions.

The threat of displacement and loss of community and routine can take a mental and physical toll especially on seniors, who are the most vulnerable to rising rents and evictions of any age group. According to CMAP, more than 1 million Chicago area residents are age 65 and older, a number that is expected to increase by 80% by the year 2050 as baby boomers age.